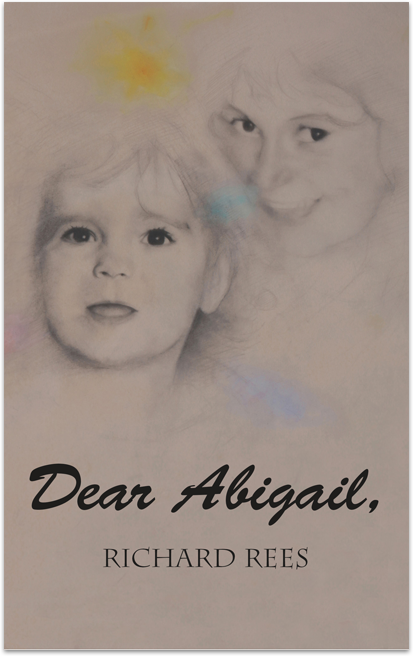 A letter to a little granddaughter

LOVE STORY FOR DEAR ABIGAIL. Richard Rees’s letter to a 2-year old granddaughter, tells the little one how much she was loved by her mother, who died at 30 from ovarian cancer. Yet, it’s a story of joy as well as sorrow, evoking such 5-star reviews from readers: “This is a beautiful, honest, funny, gut-wrenching book. A testament to the power of love in the face of great tragedy”. “This book made me laugh and cry. Not many books do that for me.”

Sitting in his study, alone with his thoughts, a man starts to write a letter to his little granddaughter. Why? Because he wants her to understand, when she gets older, who her mother was, and how much she sacrificed.

It is a harrowing story, but it is also a great “love story” and, in places, humorous. A story of hopes and fears, courage in the face of adversity, disappointments and setbacks, and ultimately the calm and dignified acceptance that what will be will be.

But, as Richard Rees’s story of his daughter unfolds, the reader realises, with something approaching dread, that there is an earlier history, a previous parallel which must be understood to be overcome.

The resulting ‘letter’, Dear Abigail, is both heart-rending and tender by turn, and also an act of healing; an attempt to find meaning in an apparently godless universe, that leads, ultimately, to faith through a miracle of daffodils.

But above all, it is an account of what it means to be human.

All the author’s royalties from this book will go to Target Ovarian Cancer.

This moving book, sub-titled A letter to a little granddaughter, tells Richard Rees’s own story of not only losing his wife Rachel to ovarian cancer when she is in her mid-forties, but the same terrible disease also takes his beloved daughter Carys when she’s just twenty-nine. Abigail, Carys’s daughter, is only two at the time and partly as a catharsis for his grief, Richard starts to write her a letter to be given to her when she’s older, telling her all about her precious Mummy. And as he writes, his letter grows longer to include a wider audience in passages that transcend the personal, becoming a study of deep love and deep loss.

Potential readers are likely to worry that this book could get mawkish. If so, they can rest easy. There is grief, of course, but there is humour too between the tears, arising both from how family members are characterized, and also from events described in the letter. Equally potent is how personal sorrow is used to explore wider themes. Both Rachel and Carys have strong religious beliefs, and the author finds his own faith shaken as he struggles to understand and accept what is happening. In the end, he confesses he can see no rhyme or reason in their deaths and finds himself asking: “Would it have spoilt some great eternal plan to have let them live, God?”

Consciously, or unconsciously, the letter throws up contrasts between the brief lives of Rachel and Carys, and the timelessness of the world that surrounds them. They live in a beautiful home looking across a bay at a landscape which has changed little in thousands of years. Even their furniture is antique, the oldest pieces having belonged to Rachel’s family for many centuries, “all ingrained with generations of loving polish, and invested with their dreams.” Add to that the references to family members long gone, brief quotes (with translations) of the ancient Welsh language they used, the sense of something immutable despite individual lives being brief, are all part of something much bigger that survives, and told through the flow and rhythm of the excellent prose running through this whole book.

Given the “letter’s” theme, it might be thought to be more suitable for adult readers, but there is nothing in it that makes it off-limits for older teenagers. It is also recommended to people who enjoy reading biographies and memoirs. Readers with caring responsibilities could also find it supportive.

The royalties from sales of this book go to a charity: Target Ovarian Cancer

Dear Abigail: A Letter to a Little Granddaughter by Richard Rees is a wonderful book in which the author – husband, father, and grandfather – shares a journey of love and loss, navigating the currents of grief, and celebrating a family that suffers from a cycle of ovarian cancer. Richard and Rachel have loved each other deeply since their teenage years, getting married at twenty-one. In spite of their painful histories, they are bound by a love that complements the childhood years marked by hardship. After welcoming two lovely children into the family, Rachel is hit by ovarian cancer, which runs in her family, and though Richard lovingly looks after her, she dies. Then Carys, their daughter, is also diagnosed with the disease while pregnant, and again Richard looks after her and also Abigail, her new-born baby. But she doesn’t live to see Abigail’s second birthday. What will now happen to Abigail? Will she be separated from the grandfather she so deeply loves?

This is a memoir that is beautifully written, in language that is enticing and with a voice that powerfully touches readers’ hearts. The book is addressed to ”little sixpence,” which is what ”Mummy-in-Heaven” called Abigail, with an opening that instantly introduces readers to the intimate tone of this spellbinding narrative. It is the genetic life story of Abigail, a story that explores themes of love and loss, of grief and hope in a family. The book brims with realism, and the author infuses the writing with a rare sense of humor, allowing readers sparkling glimpses of the alacrity imbued in human intercourse, and the joy that punctuates the life of this family. I loved the way the threads that bind members of the family are written into the story, members that are both alive and dead, and the memoir leaves readers with a powerful resounding message – love endures and the dead are alive in the memories they create with the living.

Dear Abigail is a book that celebrates the humanity of those who have been loved by the author. It will bring tears to the eyes of readers, and arouse lofty sentiments in their hearts. It is such a beautiful story of love, pain, and humanity.