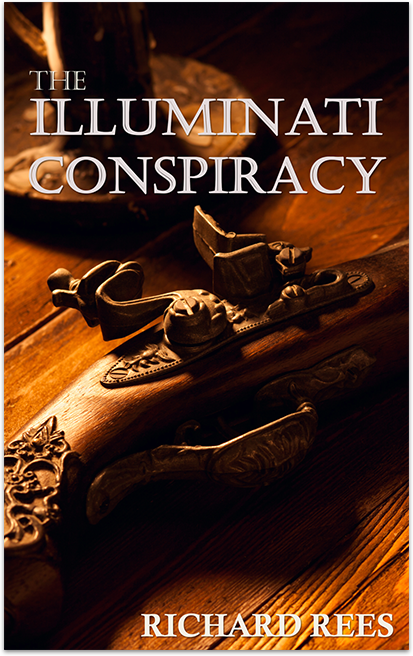 CONSPIRACY TO CHANGE THE WORLD. Richard Rees’s “The Illuminati Conspiracy”, tells of the secret society’s birth and its first attempt, in Napoleonic times, to rule the world, the outcome of which hinges on a mighty sea-battle between Britain and France off the Bay of Trafalgar. Said by some to have plagiarized his Illuminati theme from “Angels and Demons”, Rees is able to refute this. His original novel was published first, by Hodder & Stoughton.

What is The Illuminati? Read The Illuminati Conspiracy by Richard Rees and discover their origins from the time of the French Revolution, and their aims which continue to this day.

In 1802, Lieutenant Richard Machen, along with many of his colleagues, is released from active service in the Royal Navy. The British government expects a long period of peace, and believes that the threat from Napoleon has disappeared.

Machen plans to travel from his ship at Chatham to his old home on the Welsh Gower Peninsula, a wild place full of fond memories of the years spent growing up in the company of beautiful Jane Ashford. But when he breaks his journey in London, Richard Machen witnesses a cruel murder, and when he gets to the Gower, all is sadly changed. The young officer is drawn into a mystery which leads him inexorably towards the centre of an astounding plot – the very birthpangs of ‘communalism’ – to overthrow the government and deliver Britain into the hands of a secret revolutionary organisation based in France.

From coaching houses to castles, from ministries of state to ships of war, The Illuminati Conspiracy marvellously conveys the real atmosphere of post revolutionary France and Pitt’s England. Full of excitement and suspense, it is both a powerful love story, and a fascinating, richly detailed historical thriller which grips the reader at the very beginning and never lets go until the powerful climactic moment aboard Lord Nelson’s flagship at the Battle of Trafalgar, off the coast of Spain in 1805.

Richard Machen, a naval officer on vacation, is drawn unwillingly into the secret plan of the Illuminati to cause chaos. At what cost to his safety will his interference bring? What length is he willing to go for his sense of justice?

Historical fiction is a favourire genres of readers because it always has the propensity to be based on reality, and there are sure-fire lessons. Richard Rees does adequate research on the era this book is set. Hence, he gains a license to write on it. His writing flow is so smooth that readers will get engrossed in the story.

During the 1800s, when this book is set, there was prejudice, as seen in the way the British treated the Irish, which led to many uprisings. This prejudice was also seen in the bias against Richard Machen because he is American, which led to his unjust imprisonment. One line in the book which should stick with readers is: “Everywhere their ships could sail, the English presumed their divine right to rule.” In recent times, prejudices are still common in various forms. Perhaps, the course of time will fix this blight on society.

This book buttresses how humans seem to feel they can always do a better job — everyone seems to have an idea of how to make the world a better place. Napoleon has his vision, the British use domination, and the Illuminati propagates its “New World Order.” These are a few ways people go about their world-changing agendas. However, they miss the point of a country — the freedom and general happiness of the common folk. The Illuminati are willing to sacrifice millions for their idea of world-ruling based on meritocracy. It can’t be said if it will never come to fruition, because the cult is still at large with secret schemes being made.

War has never been a pretty sight, be it ancient or modern, and revolutions require necessary sacrifices. The author portrays these situational conflicts vividly. Readers will be enraptured in the description of the naval battle of Trafalgar, and the description of the various judgments dished out to conspirators.

Everything about The Illuminati Conspiracy is done correctly, and it is therefore recommended to lovers of history and conspiracy theories.

In The Illuminati Conspiracy: The New World Order by Richard Rees, two indefatigable characters race against time to stop a powerful secret society from world dominance. Set in Napoleonic Europe, the narrative follows Richard Machen, an American lieutenant in the English navy, and an English heiress, Jane Ashford, who find themselves embroiled in a conspiracy designed to surrender world domination to a secret power known as The Illuminati. Furthermore, after the fall of France at the naval “Battle of the Nile”, Colonel Edward Despard, an Irishman with French roots, masterminds a plot to murder the King of England and transform the country into a republic. And Napoleon Bonaparte is still determined to invade England in his quest to expand the French powers.

In this twisting tale, an Irish revolutionary, Conor McNamara, seeks revenge against England for the execution of his brother as one of the leaders of Despard’s foiled revolution, and he determines to assassinate the only person standing in the way of Napoleon’s naval invasion of England: Lord Nelson, commander of the English Fleet. Can Machen thwart the Illuminati’s insidious plans, and save England and the world from their grip?

Richard Rees has spun a remarkable tale that brims with intrigue, and will appeal irresistibly to fans of tales of espionage and historical novels with compelling characters. The historical details are vivid and the characters are vibrant, elaborately developed, and believable, with Machen and Jane Ashford being drawn into the dangerous plot that is designed to give worldwide power to the same secret society that was behind the French Revolution. The plot is twisting, filled with unexpected moments and loaded with action and tense moments. Richard Rees’s lyrical and unpretentious prose adds an enormous beauty to this tale, making the complex characters relatable, and building an historical world that is transporting. This immersive historical story will keep you awake through the night.