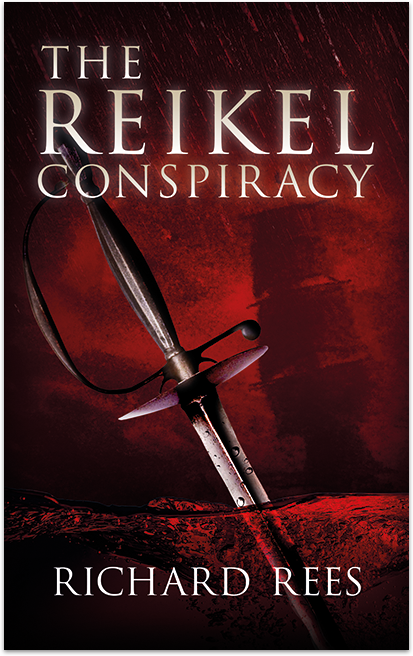 OPUS DEI COUNTER-REVOLUTION CONSPIRACY. Richard Rees’s “The Reikel Conspiracy” tells of a plot to restore the Church of Rome, disestablished by Italy’s King Victor Emmanuel, with the Pope a ‘house-prisoner’ in The Vatican, the outcome of which hinges on a clash between opposing factions including Mafia, in a deserted castle on the promontory of Portofino. Rees also rebuts taking its ‘Opus Dei’ theme from the ‘Da Vinci Code’. His novel again came first.

On December 4, in the year 1872, the American brigantine Mary Celeste, bound from New York to Genoa, was found abandoned but completely seaworthy, some 600 miles off the Spanish coast, with no sign of captain or crew. What happened has remained unsolved for over 145 years, but after a year of exhaustive research, the answer to the world’s most famous sea mystery is now told in “factional” form through the eyes of New York detective Michael Callaghan, and his estranged wife Colleen.

Investigating two brutal murders committed in New York’s teeming Lower East Side, and also pursuing their own vendettas across the Atlantic against one of America’s greatest fraudsters – “Brains” Sweeny, mastermind of the notorious “Tweed Ring”, who has fled New York with $200,000,000 of its money, converted into diamonds – Callaghan and Colleen uncover a web of intrigue and deceit, involving not only a Sicilian organization called the “Mafia”, previously unknown to the world outside the island.

A counter-revolutionary plot codenamed “Opus Dei’, conceived by Pierre Beckx, Father-General of the Jesuits, to restore the Church of Rome, disestablished in Germany by Count von Bismarck, and in Italy by King Victor Emmanuel, with the Pope a “house-prisoner” in the Vatican.

Are you a fan of historical mysteries? Are you fascinated by books or movies like The Bermuda Triangle, Devil’s Triangle , The Titanic, and especially The Mary Celeste? In which case, The Reikel Conspiracy’s storyline is for you, including solving the mystery surrounding the abandoned vessel just the way history has it, with no lurid over-the-top theories for its abandonment in mid-Atlantic and the disappearance of all on board her.

When people are murdered and their deaths justified as an end to the means, personal vendettas, rigorous investigations and religious inquisitions are carried out to find the ‘means’, and why these ‘means’ are important. The investigation of two murders in New York leads Michael Callaghan and his estranged wife, Colleen, into an implacable determination to bring to justice their evil nemesis, “Brains” Sweeny, the mastermind behind the embezzlement of over $200,000,000 from that city’s coffers as far back as 1872. But going that road is not so smooth.

The Reikel Conspiracy is set in a time when men wore long hats, and people rode in coaches. It takes a certain kind of knowledge or research to write such a book. This is a feat Richard Rees achieves.

The omniscient point of view is employed. This style of storytelling makes readers their own bosses as they get to know everything that goes on with the characters. Peering into the lives and thoughts of various characters is both intriguing and enjoyable. Even more, Rees doesn’t make his chapters lengthy. There’s nothing wrong with lengthy chapters, particularly when the book is engaging, but short and precise chapters give the reader an immediate sense of achievement. Rees understands that the best way to apply his omniscient point of view is to put slips of details to stir anticipation in small and medium patches, and, as a result, has created an epic that is extremely commendable.

The next impressive feature of the book is the suspense. It feels like watching one of the CIA or FBI thriller movies in one’s head, trying to figure out what will happen next, but to no avail, and keeps the reader turning page after page until the very end.

To make this story even more of the times, Rees uses old and informal English. In the 1870s, English wasn’t as polished as it is now. One example is: “Hope it won’t take long, Callaghan, we’s busy,” but despite the use of such old informal English, it doesn’t detract in any way from the sheer enjoyment of reading this book.

In 1872, New York cop-detective, Michael Callaghan, while investigating the deaths of two influential men, found brutally murdered on the Lower East Side of New York, finds that the clues surrounding their deaths tie them to the infamous “Tweed Ring”, and lead him to questioning where the missing $200,000,000 they embezzled from the city’s coffers have ended up, and especially where The Ring’s mastermind, and his personal nemesis, “Brains” Sweeny, has escaped to.

The only good thing about tracking down Sweeny, is that through it, Callaghan is reconnected with his estranged wife, Colleen, niece of the notorious fraudster. But as he and Colleen close in on the location of the stolen money, they find not only a tangled web of lies and deceit surrounding the vanished crew of the historically famous vessel, Mary Celeste, but also a secret society of religious holy warriors, codenamed Opus Dei, and a Sicilian organization now familiarly known as the Mafia.

The Reikel Conspiracy compiles facts tracked down by the author, Richard Rees, solving the 145-year Mary Celeste mystery. Not only that, but In this fantastic tale of mystery and intrigue, he succeeds in incorporating the extensive details of his research into a thrilling account, and also by presenting the information through character conversations and an action-filled plot rather than a dry exposé of the straightforward facts, he has created a novel of suspense, romance, drama, that makes it compelling to keep turning the pages to find out more.

The “more” includes the history of some religious organizations and how these secret societies were developed, but emphasizing that these organizations arose through individuals with fanatical ideals that were misguided. A rogue priest presented in the novel provides an excellent antagonist to the plot, and creates a terrifyingly unpredictable threat throughout the story, with the author creatively weaving his research into the story’s main plot, speculating when needed but presenting an accurate case. And at the end of the book, there is a detailed Historical Note about the facts he hunted down to create the realistic tale recounted in The Reikel Conspiracy.

There’s nothing to dislike about this book, including even the different fonts used to distinguish the written letters, telegraphs, newspaper headlines, and journal entries, quoted in the text. It is highly recommended to historical mystery lovers, and the previously unsolved case of the Mary Celeste provides a perfect backdrop for all the facts presented by the author that makes for a captivating story. As for its religious content, this is presented in a factual context, not meant to influence the reader’s beliefs, but to give insight into the past.

Richard Rees’s The Reikel Conspiracy is a well-crafted tale for fans of conspiracy with sophisticated characters and a complex plot. New York Detective, Michael Callaghan, and his estranged wife, Colleen, who are investigating two murders committed in New York, follow clues that lead them across the Atlantic in pursuit of one of the most ruthless fraudsters to have existed, the “Brains” behind the infamous ”Tweed Ring,” a man who escaped New York with $200 million stolen from the city’s coffers.

Their investigation, and their pursuit of revenge, gets them enmeshed in a dangerous game of deceit involving the powerful Sicilian Mafia – previously unknown to the world outside the island. Meanwhile, Father-General Pierre Beckx, Head of the Jesuits, conceives a plot to restore the Church of Rome which has been disestablished by Italy’s King Victor Emmanuel, and which – as a bonus – answers the famous, previously unsolved mystery of the American brigantine Mary Celeste, the brigantine that left New York in 1872 bound for Genoa, but was found abandoned in mid-Atlantic with no one on board.

This is a slow burn, with as many twists and unexpected turns as can be hoped for in this genre. The narrative features a compelling voice and characters that are likable. A simple murder investigation morphs into a rollicking ride to uncover a conspiracy linked to the abandoned brig, a tale with powerful historical hints. Richard Rees’s novel is beautiful and punctuated by engaging dialogues. The descriptions are cinematic, and the author succeeds in delivering an epic tale that is packed with plot twists. It is also fierce, Richard Rees has a gift for writing small interactions with care, allowing the tale to be permeated by humanity and realism. Though the book is lengthy, the author has an ability to keep readers guessing, and will certainly keep them turning the pages. A spellbinding mystery, and a conspiracy from history.