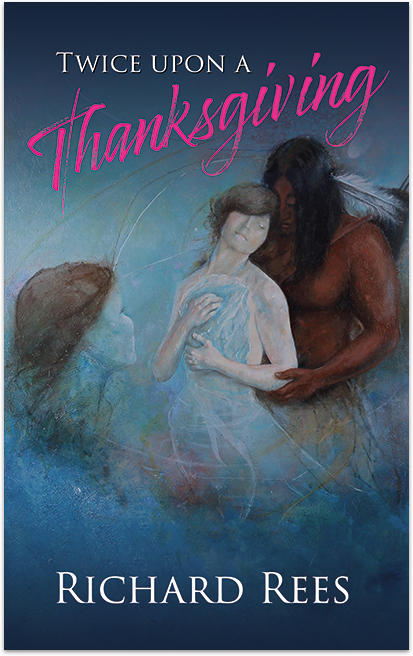 TWICE UPON A THANKSGIVING

A Love Story In Time

TIME-TRAVEL LOVE STORY. Richard Rees’s “Twice Upon A Thanksgiving” tells of a cynical today’s woman recurring dream she’s a young Mayflower Pilgrim in love with a handsome Native American chief. It becomes real when she travels back in time to find her alter-ego gives without reserve, showing the depth of true love by risking her life to save her lover’s. But if today’s woman is returned to her own time, will she have changed to aid a stranger.

Interested in Time Travel? Read Twice Upon A Thanksgiving by Richard Rees which tells how a disillusioned today’s woman is taken back in time to be her young “Mayflower” ancestor and so discovers the meaning of true love.

Damaris Moore keeps having a recurring dream. Of being chased through a dark forest by unseen demons prodding her with pointed sticks as she runs for a large beech tree, seeking the shelter of its overhanging branches that in some strange way seem to offer her sanctuary.

Always at this point, she wakes up. But is it only a dream, a nightmare? Or is it infinitely more frightening; a regression, an out-of-body experience in which she is travelling back in time, to be someone else, in some other age, before she was even born?

If so, what if one night she doesn’t wake up in time to avoid what happens next? Something terrible, so life-threatening as to prevent her returning back to the present, and her little daughter, Katy, the only person in the world she now loves, an emotion she no longer feels for any man, unwilling to trust one enough to drop the invisible barrier she has, through past experiences, placed around herself.

But on each succeeding night the dream is becoming more and more real. Suddenly, on Thanksgiving Day, she is twice drawn back into it, and realises she is occupying the body of a blood relative she was named after – one of the pilgrims who arrived from England on board the Mayflower and made their home in the “New World” – who is being chased by the same demons through the same forbidding forest. A young girl in love with the young chief of a neighbouring Native American tribe, except, unlike Damaris, her descendant gives without reserve, even to putting her life at risk for the sake of her lover’s … and in so doing reveals to Damaris the meaning of true love.

But should her namesake and her lover escape the dangers facing them, and should Damaris be returned to today’s time, will she still be her old self, or will the experience remain with her enough to change her when she meets a stranger in similar need?